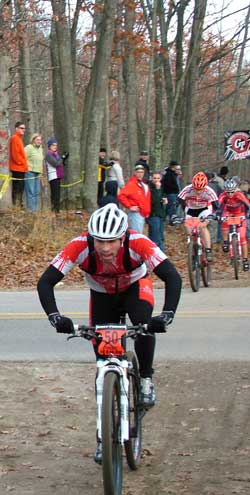 Goals for 2012: Compete in the MMBA and USAC series and Iceman Cometh Challenge.

To tell you a little bit about me, in 1995, it all started on one bad Huffyyyy. I was out riding with a friend when he wiped out, and I ran over his bike so we went to Cross Country Cycle to get his wheel fixed. I met Laura and from there it all changed. We got married and I got one good bike for a wedding present from Laura. From there it’s been great racing and fixing bikes. Currently I ride a 2011 Specialized S-Works Epic 29, 2011 S-Works SS 29 and for the road a 2011 Specialized S-Works Roubaix SL3.

My favorite ride has to be with someone who is a friend--hands down. I could go on and on about all the good times I've had with members of this team over the years.

Racing: Well I have been racing since 1996 so to list all of the races and finishes would get quite long.
So to keep it short here’s an overview.