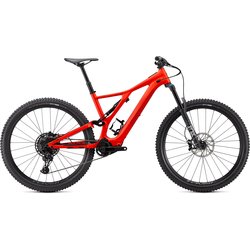 Specialized Turbo Levo SL Comp
$7,000.00
Levo SL is a new, lightweight breed of eMTB that harnesses the quick and lively ride of our Stumpjumper…and adds just enough power to introduce a whole new dimension of kick ass. Thanks to a clever component selection, the Levo SL Comp brings all of that rad down to an equally-rad price point. It’s You, Just Going Faster and Farther. The Turbo Levo SL is effectively a Stumpjumper that lets you embark on ridiculously long adventures with no fear of bonking and helps you snag three laps of your favorite trail instead of just one. Looking for a ton of power and range? Check out our Turbo Levo and Kenevo models. Want a bike, on the other hand, that simply feels like you—a faster you, with the power to ride more trails, kind of you? That's Turbo Levo SL. Tune it to Your Style. By connecting with our Mission Control App, you can tune the SL 1.1 motor to your riding style, record rides, and monitor the battery. The motor even has a built-in power meter that transmits to any ANT+ head unit. Don't want to connect? No worries—the simple Turbo Connect Unit (TCU) on the top tube gives you all the control you need to just climb on and ride all day. - Lightweight, alloy Stumpjumper-inspired frame is pure ride quality and control. - Ultra-smooth and lightweight SL 1.1 motor doubles your pedaling power. - 150mm of suspension front and rear, courtesy of FOX's 34 fork and DPS shock. - The Turbo Levo SL looks like a Stumpjumper and, out on the trail, feels like one too. That’s no mistake. We aimed to build a Stumpjumper with a bit more boost to it and that’s exactly what you get—similar Sidearm chassis with great, balanced stiffness and 150mm of smooth, custom-tuned suspension. The Turbo Levo SL Comp’s chassis is constructed entirely from our light-yet-strong M5 premium aluminum. - The lightweight SL 1.1 motor doubles your effort with as much as 240 watts of silent and powerful assistance to your pedals. The motor’s responsive torque curve delivers power perfectly in-tune with your normal riding cadence and leaves no resistance when you’re riding without power assistance. - Worried about running out of power? No problem. The Turbo Levo SL eats up big miles and long days. And if you’re looking for even more miles, our optional range extender boosts your range by another 50 percent. On top of all that, our Mission Control App can handle battery management automatically, ensuring your battery will last as long as you need it to. - Max Top Speed: 20 mph / 32 km/h 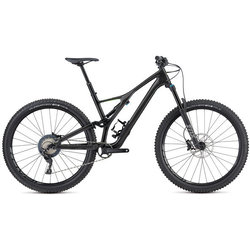 Specialized Men's Stumpjumper Comp Carbon 29
$4,520.00
Don’t worry, S-Works doesn’t get to have all of the fun—the new Stumpjumper Comp Carbon 29 features the same frame with a full 11m carbon chassis and rear-end as its older brother, but with a solid list of no-fuss components for an everyman's budget. - The Stumpjumper's asymmetrical, FACT 11m carbon fiber construction is lightweight, stiff, and ready to take on the trail. It's built off our 29 Trail Geometry, so it's just the right amount of both capable and comfortable. And with SWAT integration in the down tube, a threaded BB, easy cable routing, and an all new chain silencer, it's ready for anything the trail, or you, throw at it - The FOX DPS Performance rear shock features our Rx Trail Tune, ensuring that no matter the wheel or frame size, your bike is dialed-in perfectly - A FOX 34 Rhythm fork handles suspension duties up front, with stiff stanchions and plenty of adjustability 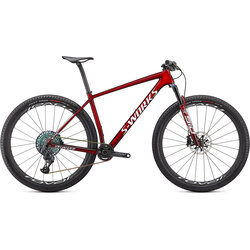 Specialized S-Works Epic Hardtail
$10,000.00
What do you call a hardtail race bike so light it can put most road bikes to shame? Well, we suppose you could call it a hardly-there-tail, but it actually goes by the name of the S-Works Epic Hardtail. Even while barely registering on the scale, we've loaded it with enough capability to do quite a number on the trail. Welcome to having your cake and eating it too, S-Works style. Working towards the lightest bike possible has long been the race within the race, but at what cost? The battle of the grams certainly hasn't been without its casualties, with hardtail XC race bikes coming to stand for a harsh, twitchy ride at the expense of capability and versatility. But who said fatigue from fighting against your own bike makes you any faster? Instead, recognizing that the fastest bike is more than simply the lightest bike, we said out with the "jarred-to-death tail", the "measure-your-posterior's-sorrows-by-the-yard tail" and in with the "avant-garde tail". The ridiculously capable, mystifyingly comfortable, head-shakingly light and all-around fast, Epic Hardtail. Sure, we optimized every inch of the Epic Hardtail frame to achieve the lightest production hardtail frame in the world anyway, but we also prioritized our commitment to creating an Epic Hardtail that's as capable as it is comfortable with aggressive singletrack-inspired geometry, increased tire clearance and a frame obsessively engineered for increased vertical compliance, all while creating a bike that lives and breathes the fundamentals of fast. Such an unbeleivably lightweight yet impressively capable frame deserves a build to match and the S-Works Epic Hardtail certainly doesn't disappoint. SRAM's Eagle XX1 AXS electronic groupset and the featherweight Roval Control SL wheelset lead the charge in dropping some serious grams while seriously ratcheting up performance. - Pairing 100 millimeters of the most efficent travel on earth with RockShox's svelte-yet-stiff SID SL Ultimate chassis, the RockShox SID SL Ultimate BRAIN fork serves as the pinnacle of XC-race supsension perfection. - Ridiculously capable and refreshingly compliant with a weight that'll make most road frames jealous, the FACT 12m carbon S-Works Epic Hardtail frame isn't just light, it's the lightest production hardtail frame ever produced. - The pinnacle of drivetrain performance, SRAM's XX1 Eagle AXS combines next-gen wireless technology, incredibly accurate shift performance and game-changing versatility to drastically redefine the riding experience. - Weighing a remarkable 1240 grams, the Roval Control SL wheelset not only increases strength and reduces weight, but also features a new 29-millimeter-wide internal width rim profile that improves pinch-flat resistance by 22-percent.
Page 1 of 1